An Open Letter to My Scale 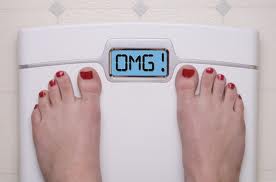 I know I keep you tucked between the bathtub and the side of the toilet.  I know it’s not the nicest location, but it’s quiet and out of the way.  For years, I’ve religiously pulled you out of your little corner and brought you into the light every morning and you’ve pretty much always disappointed me. Remember that time that I stepped on you and got super excited because you told me that I’d lost five pounds since the day before?  Yeah, you fooled me.  And remember that time that you kept flickering different numbers in .2 increments at me just to drive me crazy?

Scale, I hate to say it but here’s the truth:  You’re an asshole. You lie. I know you hang out in the dark corner just thinking about how you’re going to piss me off every morning.  You keep coming up with new and creative ways to do it too.  The last three days you’ve told me that I’ve gained a pound every day.  Not even like a half pound one day and a third of a pound the next.  No, a pound a day.

I know that bodies are funny things.  I know that you’re just showing me everything I’ve eaten and drank and haven’t had the pleasure of extricating from my body.  I know that metabolisms are tricky and hormones suck.  I get it.  But you’re a liar.  And you’re not even a good one at that.

So, I’m writing to tell you that while this should be a difficult thing, it’s really not.  I”m breaking up with you.  This relationship has been one-sided and I’m not getting anything out of seeing you on a daily basis.  We’ve been together for so long that just cutting you out of my life completely doesn’t feel right, so I’m just going to visit you once a week for now.

And since this is where I can be real with you, I’m going to tell you the truth.  I’ve been seeing someone else.  His name is (the) Tape Measure and he’s really wonderful. He doesn’t play your stupid games.  He’s actually how I found out you were lying to me.  See, he doesn’t mess with my mind when I’ve had a bad day.  He appreciates that I’ve been working out and yeah, he knows that might mean that I’m retaining some water, but he doesn’t hold it against me.

In fact, he encourages me to pull out dresses from the dark recesses of my closet. And then when I do, I’m glad that I did because I discover that things that haven’t fit me in ages, actually do.  I don’t dread pulling my jeans out of the dryer. I don’t have to engage in a massive struggle to get them on and zipped and when they are, I can actually breathe.

But if I went only by what you’ve been telling me lately, I wouldn’t know any of that.  I wouldn’t know that my body is actually changing for the better.  I would just be frustrated and probably eat a dozen donuts in an attempt to feel better.