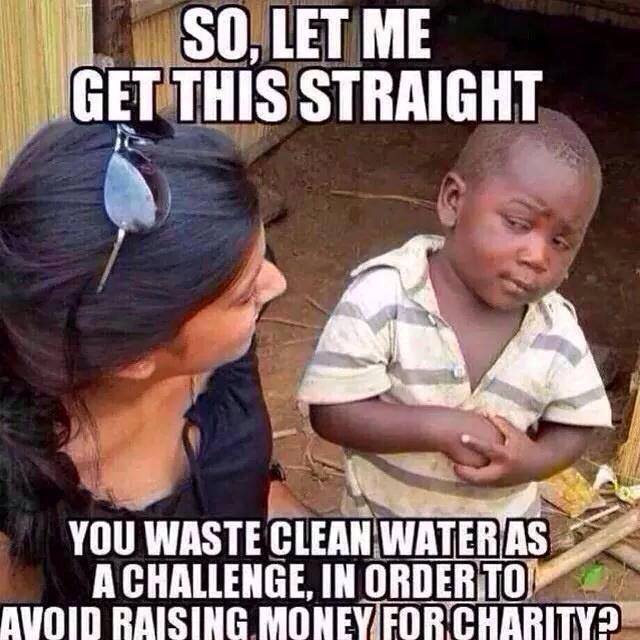 By now, I shouldn’t need to explain the ALS Ice Bucket Challenge.  Millions of people all over the world are creating a run on bags of ice, pouring it over themselves in an attempt to not have to donate to a cause.  Let me repeat that:  People are spending $1.50 on a bag of ice, running some water into a bucket, dumping it on themselves and then most of them aren’t bothering to donate to the actual cause they’re claiming to support.

Has the ALSA seen a massive jump in donations?  They absolutely have.  To the tune of about a 600% increase over the same time period in 2013.  So while videos of people dumping ice cold water on themselves has definitely had a positive impact, I can say with all honesty that the number of people I’ve seen doing both the challenge and making a donation has been limited. Usually it’s done when the bucket is empty.

Just as the challenge itself has gone viral, so has this meme about it: 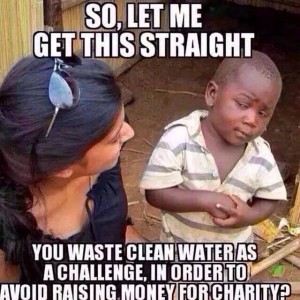 And frankly, it perfectly sums up how I feel about the entire situation.

According to the United Nations, “1800 million people will be living in countries or regions with absolute water scarcity.”  And about 3.5 million people die each year because of poor water sanitation, hygiene and supply. So please, continue being brave and dumping clean water on yourselves while people are dying because of a lack of it.

I am not a religious person by any means, but one thing that was drilled into me in Bible School (because I did have about 7 years in private, religious-based education) was Matthew 6:2 “Thus, when you give to the needy, sound no trumpet before you, as the hypocrites do in the synagogues and in the streets, that they may be praised by others. Truly, I say to you, they have received their reward.”  Or essentially, if you’re going to give to charity, don’t be a braggart about it.

I am not suggesting that ALSA isn’t a charity worth giving to or that it’s not a terrible disease.  According to Charity Navigator, ALSA is very efficient – spending almost 73% of their donations on the programs and services they provide.  And ALS is terrible, there’s no doubt about that.  My problem with this challenge is two-fold:  it’s wasteful and I don’t like the idea of being forced to volunteer to do something.

I don’t need to be nominated to do good things and I don’t need to boast about where I choose to make my donations. If I want to volunteer for a cause, I will.  And I’ll do it on my terms, in my own time and in my own way.  I’ve been in situations where I was forced to volunteer under the guise of “team building” and I can tell you that I appreciated the experience much less than being with people I wanted to spend time with working on a project that actually meant something to me.