Legend of the Walking Dead by Joy Nwosu Lo-Bamijoko

Two months ago, I succeeded in getting my publishing house to not only lower the cost of the Kindle edition of my book: Legend of the Walking Dead: Igbo Mythologies, but this was possible because I had to re-do the line edit, the copy edit,  the proof, and the format all over again. In other words, I had to redo the whole book all over again. What you are seeing in this new edition, is a completely new book. This is why I decided to re-introduce it again to you. You can also see that there is a big improvement on the cover. Here is your new, fully re-mastered, and price friendly:

Osondu wandered off by himself, his friends said. They’d gone to the banks of Ezu to play and fish, and one minute he was there and the next minute he was gone. They called him and searched the bushes to no avail.

“Ezu has taken him,” one of them said, and they ran home to inform his mother.

Gloria, Osondu’s mother, an art teacher in the local elementary schoo,l had just returned from school and was preparing dinner when she got the message about her son.

“I’m finished,” cried Gloria when she heard the news, then she sent for the women of The Gathering. These women received many calls from people who needed prayers or help for one thing or another. This time, the call was from one of their own.

While she waited, Gloria paced, wrung her hands and fought back tears, her dinner preparations forgotten. “I will see him again. We will get him back,” she muttered repeatedly until some semblance of calm returned.

That evening, the twelve members of The Gathering walked along the narrow paved road, built by early missionaries, to the clearing in the park near Ezu’s bank where Osondu’s friends had last seen him. Gloria, slightly built, fair complexioned and of medium height, came with them, still in her loose lounging home dress. Tree logs, placed like bridges over the deep gullies, bordered the lake side of the road, and high stone walls and German mango trees lined the other side. The children who came to pick mangoes had all gone home with their mango-filled baskets by the time the women walked by. A few travelers passed going in the other direction: a family on foot, a man on a bicycle, and one lone car they had to make way for.

Keen to get started, Gloria led the party into the park. She walked across the lush green grass and stared at the lake nestled in a huge crater and surrounded by thick forest. The women trooped in behind her and formed a circle around her. She made her request, for Ezu to release her son. She asked the women to join her in pleading with Ezu to release her son. At this, all the women raised their voices, as one, in shouting out Gloria’s request. Some clapped their hands, some hit the ball of one hand onto the other, some stamped their feet on the ground, and each wailed out their cries as the spirit led them.

Though deep blue and calm on the surface, dark, murky water filled the depths below. Ezu was notorious for swallowing things—even humans. People had dived into Ezu and never returned. No one knew how many people had tried to retrieve something from Ezu and, in the process, disappeared. No one swam in Ezu.

The seemingly placid lake had no outlets so did not flow, but at night the water rumbled and spat waves high onto the banks. Anyone near ran the risk of being taken by the waves and pulled into the depths of the lake. Gloria took a step back. Some thought the lake a gateway to another dimension.

She turned her back on the monster and joined the women to pray and make supplications for the return of Osondu. She stepped into the last space in the circle of women and, with great passion, added her voice to the others. The women of The Gathering had answered Gloria’s call in a hurry and had come in whatever they wore. Some wore long skirts and blouses. Some had short wavy wigs or long plaited ones, and some wore traditional long skirts and tops. They all came running, and gathered in a circle, around Gloria, holding hands as they prayed, oblivious to their surroundings. Each woman shouted their prayer of authority over and against the evil forces in Ezu. 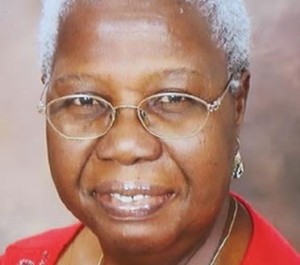 For over 30 years, 1960 to early 1990s, Joy Ifeoma Nroli Nwosu Lo–Bamijoko stood like a colossus in the art music industry of the nation. She remained an enigma in her performance, singing, broadcasting and even the small word of Opera. Till today, Joy remains a folk singer of no mean repute. At independence in 1960, she was a common face of good art. At the World Festival of Black Arts and Culture (FESTAC, 1977), Joy was a celebrity in all the singing programs where she doubled as the Assistant Director of Music Programs. She is a singer, an operatic soprano, pianist, ethnomusicologist, broadcaster, choral conductor, critic, song writer, recording artiste and a music teacher.

At age 20, while she was barely an adolescent, Joy carved a niche for herself in art music singing. For the residents or natives of Enugu in the old Eastern Region of Nigeria, her name was a household. Nroli, as she was fondly called, daughter of a Faith Tabernacle Church Pastor, whose mother was an alto, was a common fixture in the musical activities of Enugu Choral Society then. She had been representing her school in singing as a pupil. During her student days at Holy Rosary College, the young Nroli shone like a million stars in the then Eastern Nigeria Festival of the arts and won the first prize consecutively for seven years. Her status as primus inter pares remained unchallenged until her departure to Italy in 1962. Such was the rear talent of this nightingale.

Her musical exploits back in the Eastern Region and the value she added to the programs of Enugu Choral Society must have informed the decision of Holy Rosary Sister to offer her scholarship to study music at the Royal College of Music, Dublin. That marked the beginning of the journey of this young lady to unequalled stardom in the N i g e r i a n music scene. While in Italy, Joy studied at the Conservatori Di Musica Santa Cecilia in Rome, Luigi Perugini in Florenece and Giacchino Perugini in Pesaro, all in Italy. The Eight years she was in these colleges and Italy exposed her to various aspects of music  performance and production.

This research was the work of  Professor Godwin Sadoh.

Buy the Kindle version at Amazon:

Buy the B&N e-Pub version at:-

Legend of the Walking Dead:Igbo Mythologies

Links to my FB Pages

Link to my “Who Is Who On The Shelf”

Amazon.Com Link to Mirror of Our Lives……

Barnes & Noble Link to Mirror of Our Lives