I want to preface this entire post with the fact that from the very first line of SM Spencer’s Absent Shadows Trilogy, I was hooked.  I mean, I devoured the entire three-book series in a matter of as many days.  And then like a total fangirl, I sought her out to tell her just how much I loved it.  So imagine the absolute thrill I have in getting the opportunity to host her on her latest blog tour.  I hope that you’ll settle in, get comfy, pick up her books and then read on! 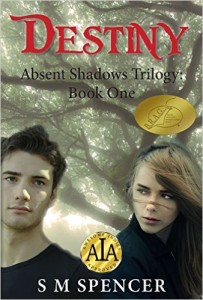 What is the story about?

The Absent Shadows trilogy is the story of a young woman who wants to make a difference with her life, but isn’t sure how to go about it. When she takes a trip to Australia to spend her summer vacation with her aunt, she discovers a supernatural world that she’d never imagined existed. Her belief systems and courage are tested, but in the end it is her love and devotion that get her through.

The book is set in and around some of the oldest parts of Melbourne, being the Flagstaff Gardens and Melbourne’s Queen Victoria Market. Most of what is now the carpark for the market was originally the site of the Old Melbourne Cemetery. The cemetery was relocated when the market expanded; however most of the bodies (some say as many as 9,000) were not exhumed, and remain there today.

What kind of person is the main character, Lili McIntyre?

Lili is a bit shy, and still rather naïve when it comes to the ways of the world, but she has a burning desire to achieve something good with her life. She is most definitely not a ‘super human’ or a ‘larger than life’ character. She is just your average girl, who finds herself caught up in a world that is anything BUT average.

How does Lili cope with the differences between California and Australia?

In many ways, life in Melbourne is very much like life in California—but cars are driven on the opposite side of the road, people use different words to describe things, and her aunt is the only person she knows when she first arrives. Building a new network of friends takes time, and it is her budding friendship with Claire that helps Lili adapt relatively quickly to her new environment.

Tell us a little about Lili’s friend, Claire.

Claire is perfection on the outside, and a little bit of a daredevil on the inside. She is the high school cheerleader, the prom queen and the girl that always had a boyfriend while the rest of us watched in envy. She’s polished when she needs to be, but a brazen flirt when she thinks she can get away with it. And even though she and Lili are quite different types of people, Claire likes Lili right from the start, and takes her under her wing.

Enlighten us about the setting of the story, primarily the Queen Victoria Markets and Flagstaff Gardens.

The Queen Victoria market is largest open air market in the Southern Hemisphere. At this market you can find every type of food: fresh produce, deli foods, fast food, meat, fish and the list goes on. You can also find anything you’d typically find at a “flea market” or other outdoor market, including both new and old items.

The Flagstaff Gardens is the oldest, and one of the most used, parks in Melbourne. It is 18 acres of beautiful meandering paths through elms, figs and eucalypts. But it is also the site of the first burials of the new colony, back in 1835, which is why it was originally called “Burial Hill”.

Being such an old area, and one that is the subject of many ghost stories and sightings, it seemed the perfect location for a story about supernatural characters. And the markets themselves were the perfect spot for two of the key characters to work. Sam and Tom work in one of the fresh produce stalls at the market, and this is where Lili first sees Sam.

What inspired you to write this paranormal love story?

I was working around the corner from the Queen Victoria Markets, up near the Flagstaff Gardens. Walking around at lunchtime, I started sensing that this was the perfect setting for ghosts and vampires—and the story just developed from there. Of course, the late night ghost tours I’d done in the area, where I’d learned the history of the cemetery under the market’s carpark and about ghost sightings all throughout the area, really helped. And like many, I was caught up in the resurgence in popularity of vampires.

Sometimes, when something bad happens, time seems to slow to a crawl.

Like that time I was running to visit my friend who lived down the street. I was only about ten at the time, but it seemed like it was yesterday. I remember exactly how it felt as I ran down that street toward her house. And how, when I was only part way there, I stepped on an acorn and my foot rolled out from under me. As I fell, the pavement got closer and closer to my face—in horrible slow-motion. I hit the ground with my hands stretched out in front of me, scraping the skin off both palms. They barely bled but man they hurt like crazy.

Yes, I could replay that memory like a slow-motion movie in my head even now—years later.

What happened next was like a series of still photos. Tom flew out of the bedroom in a blur, but stopped just long enough for the image of his face to be burnt into my mind. His eyes were no longer soft brown, but were instead a glowing red, and his normally tanned complexion was now pallid grey. But what really stood out was the blood that ran down from the corner of his mouth.

Then I heard Sam’s voice—loud and harsh. ‘Go!’

Tom was gone and I heard the door slam.

I closed my eyes for no more than a long blink—it couldn’t have been more than a second—but when I opened them, Sam was in the bedroom, bending over Claire. Was he doing something to her neck? She was so still.

I ran to the doorway but stopped short of going in. I couldn’t draw a breath to scream or talk. I just stood there, frozen.

Where can readers buy your trilogy?

They can also follow me on Facebook at: http://www.facebook.com/SMSpencer.writer  for advice about upcoming promotions as well as updates on the books I’m currently working on. 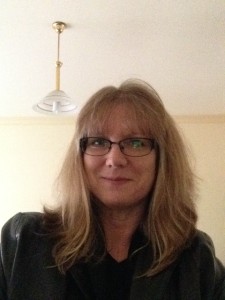 S M Spencer was born and raised in the San Francisco Bay Area of California.

As a young teenager she was introduced to the world of romantic suspense through the works of authors such as Daphne du Maurier and Mary Stewart. These books stirred in her a passion that would last a lifetime: to become a writer.

Feeling the need to experience life before embarking on a writing career, Ms Spencer completed a business degree. Her career eventually landed her in Melbourne, Australia, where she has lived ever since.

SM Spencer now writes from her home in a semi-rural part of Australia, where she lives with her husband, horses, cats and dogs.