In addition to all of my “normal” creative projects, I am about to start some new ones.  Over the holidays, the boyfriend’s family sent some fabulous presents home for me.  One of them happened to be a gift card to Joann Fabrics.  I’m not entirely sure how that became possible since most of my crafting stuff lately has come from A.C. Moore or Michael’s, but in any case, I was thrilled.

Pairing the gift card with some additional gifts I received meant that I was able to get this lovely little thing delivered in a few days: 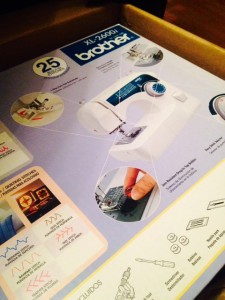 It’s been a hella long time since I’ve sewn anything, but there was a time when I did make some of my own clothes.  I’ve missed it, to be honest.  I’ve had a ton of ideas lately but sewing by hand is pretty intense and bores me.  I also have a Super Secret Project in the works for the boyfriend.

I also coerced a friend to do a gift/craft swap.  Here’s the plan:  we have one gift that we purchase to represent where we live (she’s on the other side of the country) and one that we make.  I might cheat a little and make 1.5 of the gifts but I definitely have some ideas going.  I have ideas for both of them and have already ordered the fabric (hint!  hint!) I need for one of them.  Let’s just say this little Brother is going to get good use.

I had SO MUCH FUN building this website that I decided to buy my best friend a website for the holidays.  She’s the most amazing massage therapist I’ve ever known (I mean, better than anything you’d even get at Bliss) and is working to get her own business going. So, in addition to everything else on my list, I’ll be building and promoting a website for her.  Now that I have a sense of how to execute SEO plans, I’m even more excited about it.

I’ve done the basic layout and we’re starting to build out the content.  I’ll post more details as soon as I can.  But with all of that said, since she lives 1,000 miles away, it’s time to book myself for an overpriced but extremely extravagant massage at Bliss.

As for the “normal” stuff…

My aunt asked me to do some acoustic covers for the site and I finally sat down and found some that I feel comfortable doing.  I had previously recorded an a capella version of Death Cab for Cutie’s “I Will Follow You Into The Dark” that came out really well.  The boyfriend’s suggestion was to really Make It My Own.

And so as soon as I come up with a successful way to do that, I’ll post it up for ya’ll.  It’s not the easiest thing to go from an insecure background vocalist to putting my voice front and center.  I’m dreading the open mic nights as it is.

Not only that, but I’m happy to announce that as of this evening, I own this beautiful creature: 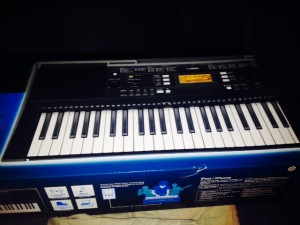 Before you ask, no, I actually cannot play piano or keyboard or any other musical instrument.  Unless, of course, you consider shaking a tambourine while channeling Stevie Nicks “musical talent”.  I digress.  My multi-talented boyfriend has offered to teach me how to play so that I can do more than stand around looking cute while singing into a mic when I eventually head back into the studio to work on another album.

Otherwise, in my Real Life, I’ve been working my ass off, trying to wrangle All The Laundry and spending far too much time navigating the lonely aisles of IKEA.