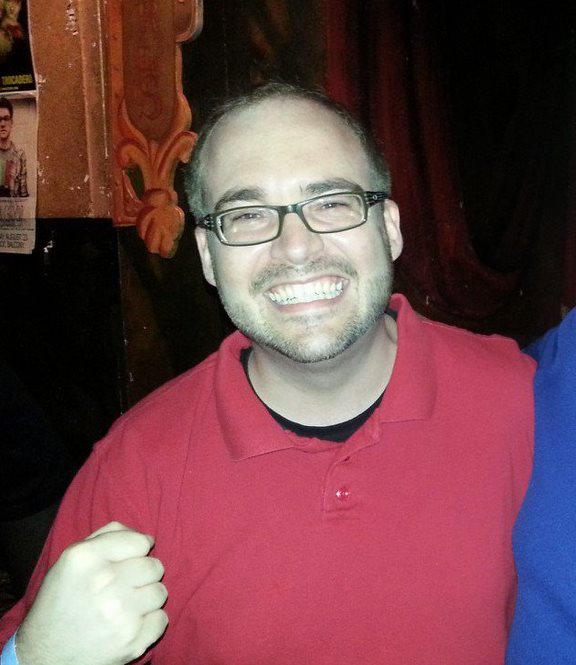 I am a pretty active and vocal participant in social media.  It’s how I’m wired, being an extrovert and all.  But I’ve never, until today, had anyone visibly express a desire to have bodily harm caused to me.  I can only think that this person – identified in my ‘Other’ messages in Facebook as Karl Heideck – had his panties in a twist over some of my comments on this Vice article regarding Zoe Quinn.

I hadn’t seen his little death wish until this afternoon because it’s not with much frequency that I’m messaged by people I don’t know, but this was what greeted me when I clicked on the deceptive little (1) next to the link: 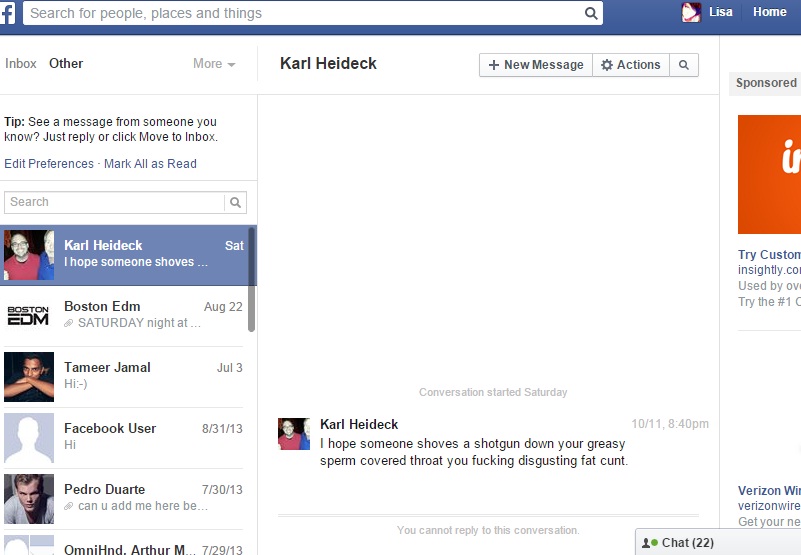 I suppose on some level I was shocked and scared and appalled and all of that is true.  But then I just got really angry.  Not only because this cowardly asshole then had the nerve to block me so that I couldn’t report it as abuse to Facebook, but because rather than just express “Hey, I don’t like your opinion”, it was immediately wishing death upon me.

I’m no internet media rising star.  I don’t use my channel on Youtube for anything productive.  And I’m not even offended about being called ‘fat’ because I’ve been called that my whole life.

I’m upset because the easiest thing to do in our society is threaten a woman.  And this person – I won’t even deign to call him a man – thinks it’s okay. Case in point:  this blog post written about him harassing someone else. Here’s an incomplete profile where it’s evident this person has no friends. Or this sad, little lonely thing.  Supposedly he’s an attorney, so you’d think he’d know better.

When the best picture you can take – because let’s face it, that’s what your FB profile picture ought to be whether or not you’re trying to snag someone – is with former WWE wrestler Rowdy Roddy Piper, it’s a lonely life indeed.  I did Piper the honor of removing him from Heideck’s profile picture because I’m sure he doesn’t want his fans being associated with stupid antics such as these.  There’s throwing a chair in a ring and then there’s wishing someone shoved a shotgun down a woman’s throat.  NOT THE SAME, Karl! 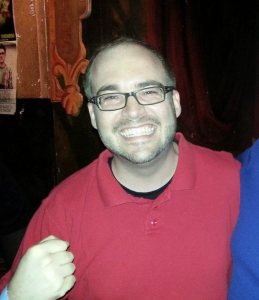 Now I know, I know, saying that “someone” should shove a shotgun down my throat and him not actually threatening to do it himself doesn’t constitute assault.  See, I may not be an attorney, but I do know that much.  But from an ethical standpoint – which had been where my laurels were entirely resting in the Vice article – it’s disgusting.

A woman I may be, but I’m not powerless. I called and left a message with the Disciplinary Board of the Supreme Court of Pennsylvania and I will be filing a complaint with my local police district as well.

So here’s a message to anyone that thinks it’s okay to harass a woman for any reason: it’s not.  Maybe you’ll be “lucky” and pick on someone too timid to stand up to you, but in this particular instance, you fucked with the wrong person, Karl.

My surly friend, Sockrates Jones decided to come to my defense: 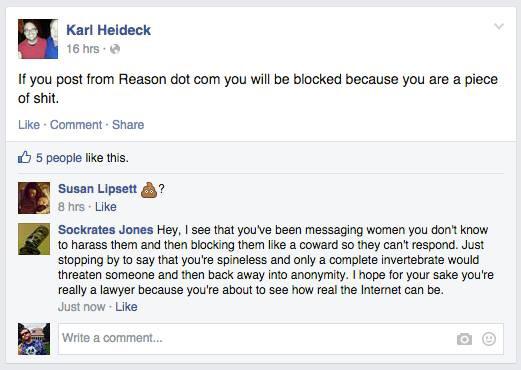 While Sockrates’ comment was immediately removed, it was followed up by a private message on Facebook asking who he is and calling him “Felicia”.  No mention of shotguns down throats.  I can only assume this is because in addition to being a coward, Karl Heideck is also a misogynist. I mean, it was pretty clear before, but at this point, it’s the only real conclusion I can come to.  Clearly full of vitriol for the ladies, he appears to be too terrified to engage another male, even if it’s a sock puppet with a hankering for Natty Ice.

And here we have another example of the charming Mr. Heideck suggesting eating shotguns: 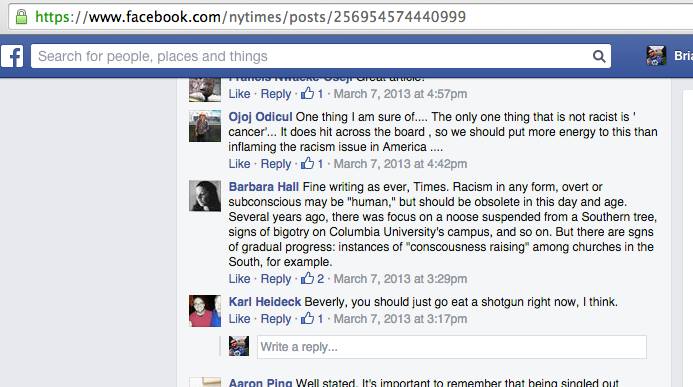 Apparently the thought of women swallowing shotguns has been appealing to Mr. Heideck for quite some time.  I am at least uplifted by his lack of creativity and ability to see me not as the unique snowflake I am by perhaps suggesting another form of homicide be committed upon me, but rather that other women should also “eat a shotgun”.  Rather than be intimidated and delete my own comments or even this post, I’ll continue digging around to see what else I can find.

It’s going to be a really fun conversation with the Disciplinary Board for District 2 tomorrow when I call again.  Because, you see, I will be going to the police and I will be filing harassment charges and according to the PA Code of Conduct for attorneys, cases involving attorneys in their personal capacity can indeed spill over into their professional life.   See, Karl:  “A pattern of repeated offenses, even ones of minor significance when considered separately, can indicate indifference to legal obligation.”

I heard back from the Disciplinary Board, who assured me that they take these types of complaints seriously, and encouraged me to file a complaint.  I’ve faxed over the documentation this morning and they will begin their investigation.

Redacted forms are below: 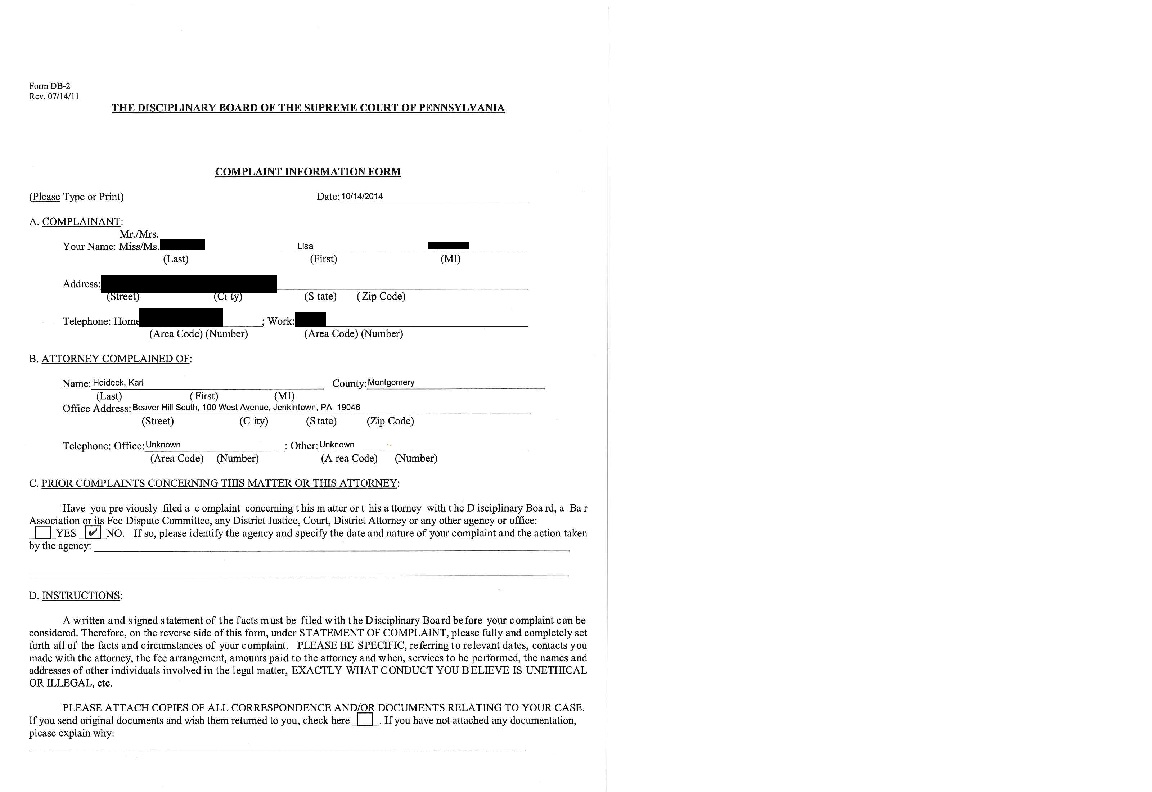 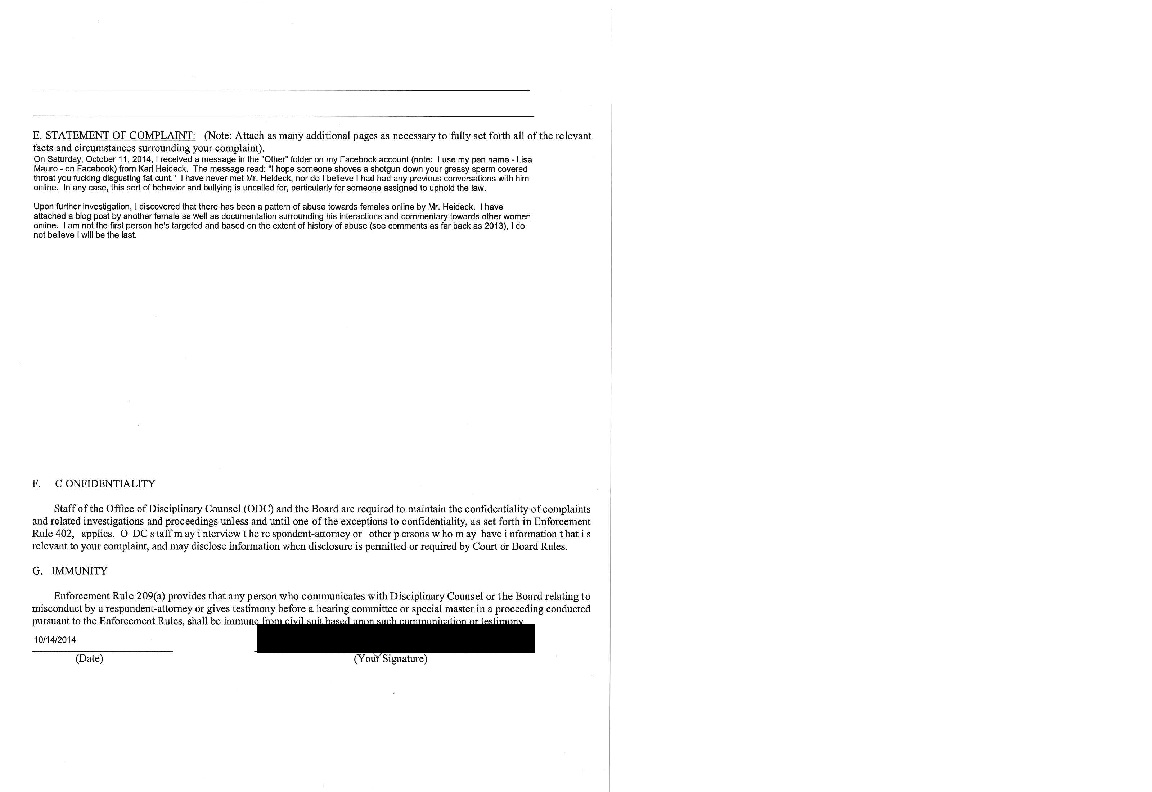 Well, friends, it appears that Heideck has had a change of heart. 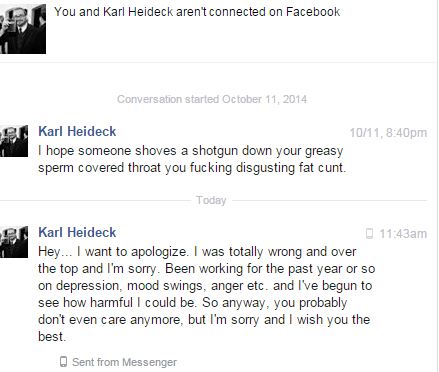 If you’re one of the many women that have contacted me about his persistent harassment of you, check your inboxes to see if you received a contrite apology as well.  Perhaps you will find yourself in a more forgiving place.

I am not just a woman.  I am a survivor.  And it’s doubly offensive to me that anyone thinks it’s appropriate to speak to me in such a manner, make threats against me, taunt me for pursuing legal avenues and for reporting this as a crime.

I am tired of women being shamed for what we wear, how we look, how we speak, what we choose for our professions, how much we drink, how we choose to socialize and not just being shamed but actually being penalized.

If you want to understand how frustrating this is for a woman, consider this:  The first time I was raped (yes, it’s happened more than once), the person was never even caught.  The police took a report and never even bothered to have me get with a sketch artist so they could try to find the person.  The second time it happened, the police had a recording of the assailant admitting I did not consent and even that wasn’t even enough for the State Prosecutor to feel they could get a conviction.  I was advised to allow him to plead down from two felony charges to a single misdemeanor, which he promptly accepted and had expunged from his record a year later.

I ask…how do I expunge this from my own record?  I cannot.  I get to live with the consequences of it for the rest of my life.

When the “justice system” wants to start actually doling out justice, I’ll be here, waiting as patiently as ever.  But until then, I have the right to not accept an apology that I don’t think is sincere and I am exercising that right.

What Heideck did is NOT okay.  Not in my book and hopefully not in yours either.  Apologizing years later for his persistent abuse, not just of me but of many other women who have reached out to me to share their experiences with him, is simply not enough.

I’m not sure what’s been happening in the world of Karl Heideck lately, but today, a slew of you have found this post and commented so I can only ascertain that he may be up to his old tricks.

Here’s his blog if you’d like to tell him what you think of him directly, although based on some previous comments here, he very clearly still enjoys coming back to this post about himself.

I’ve received some comments from folks that take SEO-type contract work informing me that Heideck has been posting jobs essentially trying to bury this post and hide his true character.  I suppose in the way traditional SEO works, this makes sense.  If he has a bunch of little writers and copy-editors and SEO folk hammering away blog posts and comments he’ll bury me, right?  Yeah, he did for a while but the truth is that once those payments clear, the very people that have taken those jobs have tended to come here to tell me about it, thus making his plans ineffective.  And I am nothing if not dedicated.

Two years after all of this began, Heideck began trying to change his image, or at least that’s how it appeared from his seemingly “heartfelt” apology.  But the truth is that he hasn’t changed.  Not according to what I’m easily able to find online, anyway.  Here’s a sample of some of replies he’s gotten since his “apology”.  I’m sorry that I don’t have time to track down the original things he’s said since my last major update but based on what people are saying back to him, I can only imagine what he’s actually said.  Also, he’s since blocked me on Twitter and called me his stalker rather than the truth which is that he’s a piece of shit who likes to troll and harass people online and then gaslight them into thinking THEY are the problem.  Karl, it’s YOU.

Now, with all of that out of the way, here’s what I’d ask of you if you’ve found your way to this post:

34 Comments on “Karl Heideck: And the Death Threats Begin”