Some of you may remember a few weeks ago when I bombarded your Facebook news feeds with how much I was enjoying a new series I’d discovered. Over the course of a single weekend, I read every single word of it.  And then I called some of you and excitedly told you that this series was the reason I joined Kindle Unlimited and convinced at least one of you that the YA genre isn’t just for kids.

After sitting around debating it for a while, I decided to contact the author and – in total fangirl mode – ask if I could interview her.  Much to my surprise, she agreed!  So, I give you my first ever author interview with the lovely and talented S M Spencer.

Tell me a little about yourself.
I was born in California and grew up watching the eerie television shows of the 60’s: Dark Shadows, The Twilight Zone, The Invaders and Outer Limits being among those I remember best. What imaginations those writers had!

The creative side of me contemplated studying either literature or parapsychology at university however the logical side of me won out and I ended up studying business instead. This led me to a number of occupations over the years, the most exciting of which landed me in Australia. I literally fell in love with the country—its people, its places and its culture—and made Australia my permanent home.

What made you want to start writing?
I think the desire to write started when I was very young. All kids write stories, for sure, so I don’t think I was all that different in that regard. But when I’d read a good book, I would live the story for some time afterwards, often re-writing the ending. I was amazed and in awe of the writers who could do that; write stories that saturated me so completely. And the respect I had for them was what made me want to be like them.

Do you write full-time or do you have a dreaded “day job”?
I am fortunate enough to have re-tired from my “day job” and can now direct all my creative energy toward writing.

Tell us a bit about the Absent Shadows trilogy.
The Absent Shadows trilogy is the story of a young woman who wants to make a difference with her life, but isn’t sure how to go about it. When she takes a trip to Australia for her summer vacation, she discovers a supernatural world that she’d never imagined existed. Her belief systems and courage are tested, but in the end it is her love and devotion that get her through.

The book is set in and around some of the oldest parts of Melbourne, being the Flagstaff Gardens and Melbourne’s Queen Victoria Market. Most of what is now the carpark for the market was originally the site of the Old Melbourne Cemetery. The cemetery was relocated when the market expanded; however most of the bodies (in the order of approximately 9,000) were not exhumed, and remain there today.

What inspired you to write the Absent Shadows trilogy?
I was working near the Queen Victoria Markets and the Flagstaff Gardens at the time, and the location really spoke to me. I started imagining vampires and ghosts living in the gardens and the market. This was also fueled by the fact that I’d been on a couple of late night ghosts tours where I’d learned the history of the bodies under the car park and heard stories of ghost sightings all throughout the area.

So, taking all my love of the paranormal into account, along with the resurgence in popularity of vampires, I began hashing out the story. And the more I wrote the more vivid the story became for me, aided by my ability to walk through the gardens or the market whenever I needed more inspiration.

If your series were turned into a movie, who would you like to see play Lili and Sam?
If we could go back in time I would say Nicole Kidman and Jake Gyllenhaal. But who that means in today’s terms, I couldn’t say.

Who designed your book covers?  How did you select the models for the covers?
BookPOD did my cover designs. Sylvie and I worked together to source the models from thousands available on various sites, and Sylvie’s wonderful graphic design skills brought everything together.

Why did you decide to go the indie route versus traditional publishing?
I canvassed a number of agents and a couple of e-book publishers and got responses that varied from cold to luke-warm. The main message coming through was that the genre was very crowded, so I figured I was wasting my time trying to get a publisher to put their money into the series. But with encouragement from friends and family I decided to simply bite the bullet and do it myself.

What has been your biggest challenge as an indie author?
Marketing. As a writer yourself Lisa, you would be well aware that getting the word out there about your book is the hardest part of being an indie author. Interviews like this, and indeed interviewers like you, are gems and are much appreciated as a way of reaching out to new readers.

What advice, if any, do you have for new indie authors?
Firstly, ignore the negative commentary about there being too many books out there. If you have a story to tell, and you believe in it, tell it. There will be people who will be glad you did.

But having said that, before you submit it anywhere, make sure your book is the best you can make it. Read books or articles about self-editing. When you think your story is as good as you can get it, set it aside, then sometime later re-read it and edit it again.

You recently won an IndieBRAG medallion.  Tell us how you felt when you found out.
Absolutely THRILLED. Being validated by your peers is an incredible feeling, and the indieBRAG medallion honorees is definitely a peer group I feel proud to be part of.

What’s next for you?  What are you working on now?
I’m currently working on a rural romance. I have horses, dogs and cats and have always been a country girl at heart so I thought I’d try that “write what you know” advice. But I will get back to Absent Shadows soon, as the continuing story is bubbling away in the back of my mind and will no doubt surface before too long.

I want to thank S M Spencer for joining me on my blog today. If this has at all intrigued you, I highly recommend the series.  And remember that nothing shows your support for indie authors better than leaving honest reviews of their work on Amazon and Goodreads.

For more information, check out the following: 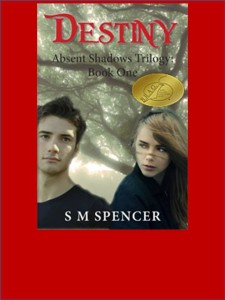 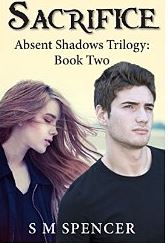 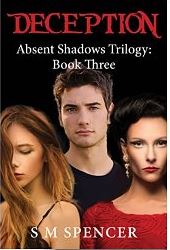