↓ Skip to Main Content
Home › blog/">blog › The Power of Community

The Power of Community

Yesterday, I stumbled across GoFundMe when a friend linked to a particular crowd funding page.  While I found it interesting, I didn’t connect with the story on a number of levels but admittedly most of all it was because of my own white privilege.  There, I said it.  But I did some searching in the “Wishes” category and I found something I instantly connected to:  Constance’s Weight Loss Journey.

This isn’t my first foray into crowd funding.  My boyfriend and I donated to support a friend’s third album and my boyfriend is notorious for backing independent game developers.  So what was different about this?  I don’t know Constance at all.  Until I stumbled across her page, I had never heard of her, but her struggle is definitely something with which I’m familiar.

Years ago, I worked for a boutique investment company.  I was Lowest Girl on the proverbial totem pole and I worked in a department full of well-off professionals – mostly women – that spent their time traveling to exotic locations and whose husbands bought them nice cars as birthday gifts.  I couldn’t relate.  Right outside our swanky office on 46th Street, just outside the heart of Times Square, there was a homeless man that used to beg for change outside the subway.  Now him, I could relate to.

“I can’t give you money,” I said to him one day, “But I can buy you breakfast.”  And so began an almost daily routine whereby I’d buy him a coffee or a bagel or sometimes both if he was particularly hungry.  This act didn’t make me any better than the people that walked by him as though he was invisible.  It was selfish.  It made me feel better about myself.

Before crowd funding became part of our lexicon and before people used the internet to back their projects and dreams, there was a homeless man on a street corner.

Fast forward to yesterday. My struggles with weight loss have been well-documented and I’m not above trying anything to get these last “few” pounds off.  I’m on Day Two of my Plexus journey, for instance.  So when I came across Constance’s page, I was really inspired. Here’s a woman who not only turned her whole life upside down to make her health a priority, but now she’s struggling to keep it that way.

I know that struggle.  I spent thousands on diets that didn’t work.  I spent hundreds on gym memberships that didn’t re-shape my body.  It wasn’t until a trainer at one of the gyms where I worked saw how hard I was working out and how I wasn’t getting results that he trained me for free and helped me lose twenty pounds that I didn’t keep off.  But the experience was worth it, because I stored that knowledge and now know the kinds of workouts that work for my body.

I’m so fortunate.  I have friends that are BeachBody coaches that are always willing to give me workout tips if I were only willing to try them. I lived next door to a personal trainer for a year who gave me tons of advice and encouragement. I had a trainer who saw promise in me and worked with me for free. But the reality is that this stuff doesn’t come cheap. Memberships are expensive. Eating whole and real food is expensive. Having to buy entire wardrobes at a time after dramatic weight loss is expensive.  It’s easy to just give up and accept being obese because despite how uncomfortable it is, we’re comfortable with what we know.

Constance is changing that for herself and I was inspired to help. 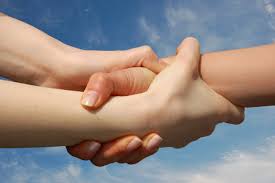 2 Comments on “The Power of Community”