The Adventures of Winter in New England

This rant isn’t about you folks from tropical climates that find yourself spread across five uncomfortable seats at Logan Airport.  No, this is about you Townies.  You know who you are.  You were born here, never left and plan to die right where you were born – which was most likely in the basement of a Charlestown project or in a room pairing the smell of weed and patchouli in Somerville.  Yeah, you.

Since you don’t seem to have common sense or courtesy, here are some tips to successfully help you navigate public transportation for nine months of the year (or as we call it – winter):

One of the biggest things that causes me confusion are the insane lines at the grocery store whenever there is the threat of snow.  It could be a predicted dusting or three feet but the ensuing result is still the same.  People rush to the grocery store and fill their cart with none other than milk, eggs, bread and cheese.  Are these the sorts of staples you feel your family needs if you’re going to holed up at home for a day or two?

Well, I offer you a mere sampling of the things on which we stocked up.  At least being stuck here is a lot more fun! 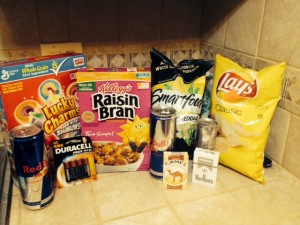 Yes, you saw it here first.  Red Bull, Lucky Charms, Raisin Bran, White Cheddar popcorn, Lays potato chips, smokes and batteries (solely for keeping the Xbox One controller alive and kicking) were the items we decided were important.  I do not view this as irresponsibility because we were already stocked up on milk, eggs, bread and cheese – just like most intelligent people.

Now, if you will excuse me we also need some guns, ammo, astronaut food, canned goods and, of course, water.  You never know when people will catch a virus that induces brain-eating.  Or ya know, if they start sniffing enough bath salts.